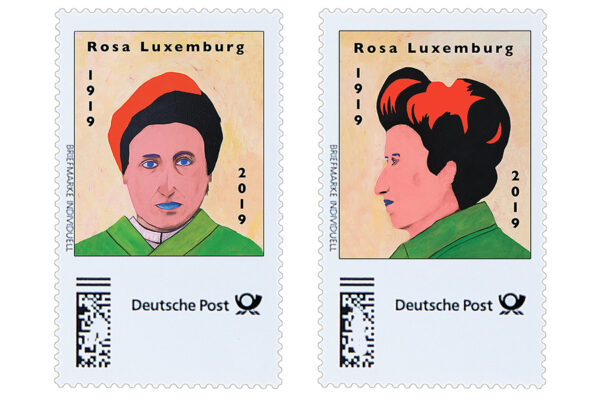 The crowdfunding was successful , Thanks a lot an all supporters !

Until  the end of August will be produce 5,600 stamps

For those who want stamps, you can order them at the following address

A stamp for Rosa

On the occasion of the 100th anniversary of the women’s vote in Germany and the hundredth anniversary of the death of Rosa Luxemburg, the idea came to me of making a stamp, a pop art portrait of Rosa Luxemburg. Too often, women have been and are excluded from the official story. Rosa Luxemburg is a courageous and impressive thinker who should have a place in history. Live free, for a woman in 2019 is still an everyday struggle. How much courage did it take a hundred years ago to interfere in politics, and to choose free love rather than marriage? The free and brave male characters are in this society worn to the skies. Why should not women have the same visibility? This stamp is a tribute to Rosa Luxemburg and women in general.

These postage stamps produced by Deutsche post are official and with a postal value of 0,80 €, price of a letter from 01.07.2019 in Germany